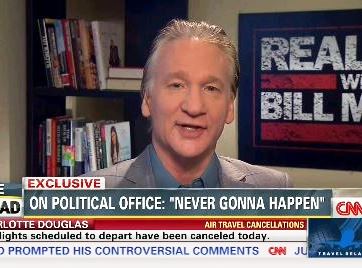 Bill Maher appeared on CNN’s The Lead with Jake Tapper Friday in a taped interview that delved into his plan to “Flip a District” in Congress this year, along with his own political aspirations, or lack thereof.

“After I got Obama elected with my million dollar contribution last year, I thought, what the hell, I’ll keep going,” Maher told Tapper, before explaining the “paradox” in which Congress has a 10% approval rate but incumbents manage to stay in office 90% of the time.

Referencing comments made by Rep. Steve King (R-IA) challenging Maher to run for office himself, Tapper asked the comedian if he would ever consider entering politics as a candidate. “Of course not,” Maher said. “I’m an atheist pot smoker, it’s never going to happen. Nor is it something I’d ever want to do.”

Looking ahead to the 2016 election, Maher said he would like to see Senators Ted Cruz, Rand Paul and the “rest of the insane clown posse” run for his own “selfish reasons” (ie. comedy). But since he’s a “patriot first” he said wants the “most qualified people” to run. He said the “biggest problem in politics” today is that both parties have moved so far to the right that “we really don’t have a left party.”

Finally, on marijuana legalization, an issue about which Maher cares deeply, he said wanted to know what President Barack Obama “has got to lose” at this point when it comes to his “evolution” on the issue. “Let’s be honest, he was in something called the ‘Choom Gang’ when he was in Hawaii,” Maher said. “If anybody knows that marijuana doesn’t prevent you from rising to the top, it would be him.”

Watch the interview video below, via CNN: