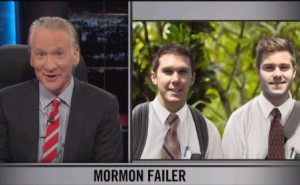 On last week’s edition of Real Time, Bill Maher argued during the panel discussion that Mitt Romney should be giving money to an actual charity rather than just the standard tithe to the Mormon church. Maher’s comments were immediately picked up by the conservative blogosphere, and in his final New Rule tonight, Maher defended what he said by arguing that while the Mormon church does good works, unlike most charities, it is not their main focus.

Maher first clarified his comment that Mormonism is a cult by explaining he meant to say “his ridiculous church.” He admitted that there is no real distinction between a cult and a religion, but he argued that as opposed to Catholics who are very upfront about their beliefs, Mormons tend to be more “secretive” about their faith. And that sounds cultlike to Maher, at least.

But then Maher pivoted to make a more serious point about Romney’s donations to the church are not the same thing as charity.

“When Mitt Romney gets a deduction for giving to charity, the rest of us taxpayers have to cover the loss. Charitable deductions reduce the public coffers by about 60 billion dollars a year… So it is fair to ask what should constitute a charity.”

Maher made it clear that he would have no quarrel with Romney if he gave the same amount of his income to the Red Cross or similar charities. But he reminded viewers that the Mormon church has spent a lot of money not on charitable causes, but on advocacy for issues like California’s Proposition 8.

However, despite whatever other agendas the Mormon church may harbor, the institution does use a fraction of its money for charitable causes. Maher said he understands this point, but it’s still not good enough to qualify as an excuse for counting donations to the church as charity.

“They provide food during famines and wheelchairs to the lame. But that’s not their main concern. Which is, like any business, growing the business, opening branches, selling more product, putting asses in tabernacles. General Electric plants a tree every now and then, it doesn’t make them Johnny Appleseed.”

But lest you think Maher was only targeting religion in his New Rule, he made a point of telling viewers that donating to the arts also does not qualify as charitable giving. He brought up the Walt Disney Concert Hall in Los Angeles, and how people who give to it get tax deductions for their charitable giving. He argued that this, too, does not qualify as a charity, because “unlike food and water, access to Mozart is not a basic human necessity.”