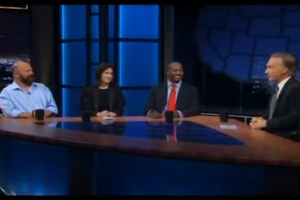 There was a lot going on on the Real Time panel last night, so much so that we may need another post to cover it. Besides the life and times of Sarah Palin, the eclectic crew– Atlantic senior editor Andrew Sullivan, Center for American Progress fellow Van Jones, and The Nation‘s Katrina Vanden Heuvel— had strong words on energy reform, the security crisis in the Middle East, and fighting wars.

Maher opened the discussion by admitting that the oil disaster in the Gulf was a little too depressing for him. The solutions aren’t easy, by anyone’s standards, but agreeing on how to fix the problem– and the bigger problem of energy dependence– was slightly more difficult. Sullivan insisted on taxing oil and gas to make them expensive enough to phase out of the market, but the market was so huge, countered Jones, that it isn’t quite that easy. “You get one cockroach in your house,” he explained, “and you say ‘it came on the pizza box,’ you’re lying to yourself.” The same logic applied to oil drilling platforms, he argued– when you see one, many are not far behind.

As for the other massive problem on the Obama plate, the Israeli blockade on Gaza and the international furor over their seizure of a ship heading there, the panel was also divided. Sullivan argued that the seizure was condemnable; Maher brought up the fact that the other side includes people like the Taliban, who gas schools. It was, Maher’s opinion notwithstanding, possibly more depressing than the oil spill talk. The light at the end of the tunnel, though, is a fun theoretical at the end on what America would do if Canada were openly calling for its destruction from the face of the earth.