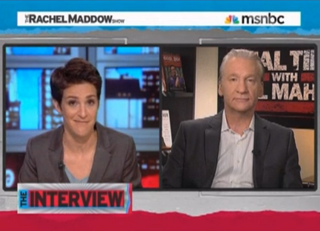 While the 2012 Republican presidential candidates tore each other apart in a “kitchen table” setting tonight, Bill Maher took time off from being host to pay a visit to Rachel Maddow, where the two chatted about Occupy Wall Street and its respective strengths and weaknesses. Unsurprisingly, Maher supported the group, but found the one thing being held most against them, their seemingly unfocused rage, to be a positive trait.

“I like it that they’re militantly vague,” Maher told Maddow, noting that it was precisely the thing that distinguished them from the Tea PArty. He noted that the Tea Party did hold many of the grievances that Occupy Wall Street now does, but that it went awry somewhere along the way and turned into a socially conservative group. “It just shows how easily the people in the Tea Party can be herded into something else, they were sort of on the same page [as Occupy Wall Street],” he told Maddow.

Maddow countered that she was not entirely sure that it was true the Tea Party and Occupy Wall Street ever had aligning ideologies, asking whether they were ‘ever even anti-bank.” Maher agreed, suggesting they were similar to the John Birch movement or other fringe groups, and that “the Republican Party periodically gets taken over by a group of people,” usually concerned with social issues. Maher also took some jabs at the presidential candidates that attacked the movement, particularly Herman Cain. “They wouldn’t be rich if they didn’t have this great country that provides the roads and schools,” Maher noted, adding particularly that being rich to him was a “fluke”– “what you do is not what makes you rich.”

The segments via MSNBC below: