Bill Maher: The Republican Party Is ‘At War With Common Sense’ 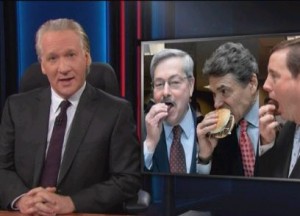 In his final New Rule of the night, Bill Maher got around to the weeks-old controversy over the “pink slime” that’s been in our meat for all these years. And Maher observed that in all the backlash to this gross additive, many Republicans have attempted to defend the meat industry and insist there’s nothing wrong with the slimy substance. He opined that this, like so many other contemporary issues, should not be so political, and bashed the GOP for taking a contrarian position on what he said were fairly non-controversial topics.

Maher called out several Republican governors, including Iowa’s Terry Branstad and none other than Rick Perry, for touring a “pink slime” factory and eating some delicious hamburgers to prove to people that the whole health issue is much ado about nothing. But in looking at the bigger picture, Maher observed that this was part of a seemingly larger trend by the GOP of taking illogical positions on issues.

“I think the Republican party is at war with common sense… I think Republicans live in a world now where whatever a liberal says, no matter how sensible, is automatically evil, wrong, and needs to be fought with the fervor of a starving racoon on crystalmeth.”

He reminded the audience that many Republicans did not exactly react positively to First Lady Michelle Obama‘s healthy eating initiative and attempts all around the country by state legislatures and school boards to encourage children to eat well. He also pointed to the time when Sarah Palin brought cookies to a Pennsylvania school to take a stand against the “nanny state” trying to get children to eat healthy foods.

Maher asked how the GOP has suddenly become a party where anything and everything that did not used to be controversial suddenly is. He went down the list from Newt Gingrich questioning the necessity of child labor laws to Rick Santorum calling President Obama a “snob” for wanting everyone to go to college. Maher concluded by also reminding viewers that whereas environmental issues used to be bipartisan, there is more division on these issues than ever.