Bill Maher Throws Cold Water On Gun Control: ‘You Can Do All This S**t, It’s Not Going To Change Anything’
video

Bill Maher Throws Cold Water On Gun Control: ‘You Can Do All This S**t, It’s Not Going To Change Anything’ 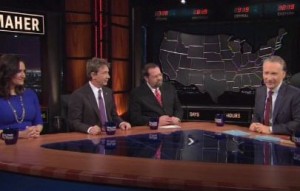 On his first show back of the year, Bill Maher got into an intense discussion of gun control and President Obama‘s executive orders with the panel. Maher thought it was promising that Obama is seriously taking on this issue, but doubted it would actually amount to anything, saying that while he personally wants every one of Obama’s policy proposals implemented, at the end of the day, “it’s not going to change anything.”

Maher warned the audience at the top of the discussion that they won’t like what he has to say, before immediately sharing his pessimism with Obama’s executive orders. Firstly, he predicted the assault weapons ban would be dead on arrival in Congress. Secondly, while he agreed with Obama’s policies and believes that the country needs to “shrink the tumor that is the NRA,” he doubted any of it would be effective, saying “you can do all this shit, it’s not going to change anything.”

Panelist Martin Short argued that it’s all about gradual cultural changes, much in the same way the United States changed the culture about smoking. Short asked why the NRA, an organization made up of only four million people, wields such power. Michelle Caruso-Cabrera pointed out that many Americans own guns and might sympathize with the goals of the NRA. Maher simply added, “we’re the gun country.”

Maher predicted that even if the assault weapons ban gets implemented, the next school shooting will happen without them. He brought up the Third Amendment, which is all about quartering soldiers in wartime and generally doesn’t apply these days, to argue for the irrelevance of the Second Amendment. Maher argued that the difference between the United States and other countries that embrace guns is the U.S.’s gun culture, saying that while he is personally a gun owner, he emphasized that he is not a “proud gun owner.”

Short steered the conversation to violence in movies and video games, and how the NRA has been pointing fingers in that direction. Maher first said that violence has existed long before mass media, but then pushed back against LaTourette’s insistence there is no proven link between video game violence and real-world violence.