Bill Maher To Chaz Bono: ‘We Have Cars That Park Themselves… How Are They Doing With Dicks?’ 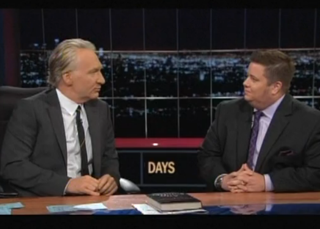 Last night’s incredibly zany social salad on Real Time included a number of people who would have otherwise likely never been in a room together– Bill Maher included with Ann Coulter, Chris Hayes, and Chaz Bono, which of course let Maher explore some of his curiosities. For example, he asked Bono– who completed the physical process of becoming male– if, given how advanced car parking technology is, “how are they doing with dicks?”

Maher didn’t seem to mean any harm, but in his interview with Bono he managed to say a number of fairly uncomfortable things to Bono. For one, “you’re a straight white man, high five!” With Coulter giggling in the background, Bono had to politely decline high-fiving his entry into such an elite group. He did answer, though, that he was very happy “having the way I look reflect the way I feel on the inside” for the first time in his life.

Maher then went on to ask about how artificial penises work: “we have artificial limbs, artificial hearts… cars that can park themselves… how are they doing with dicks?”

Given the way the question was framed (for maximum shock value), Bono replied rather calmly, answering that it isn’t going as well as expected because there just isn’t that much money to be made from it. “There’s a lot more money in your iPod parking your car than there is making a functioning penis for a transgendered man.” This Maher blamed on the “fucking Republicans,” just to make Coulter angry (she just laughed it off). Awkward as the conversation was, however, Bono did respond seriously to Maher’s actual questions, concluding that “there are not a lot of us and most people don’t understand us to begin with so it’s kind of a hard issue.”

Two highlights from the conversation via HBO below: