Bill Maher New Rule: ‘Why Do We Punish Sex So Much More Than Anything Else?’
video

Bill Maher New Rule: ‘Why Do We Punish Sex So Much More Than Anything Else?’ 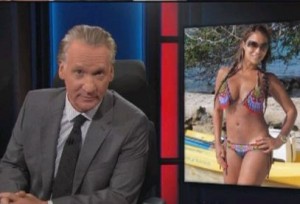 SEX. Now that I’ve got your attention, Bill Maher has a few words he’d like to say. In his show-ending New Rule tonight, Maher went after the media for pursuing the most titillating details of the Secret Service prostitution scandal instead of something more seriously important. While President Obama went to Colombia for a summit with Latin American leaders, it has not matched the media coverage of the Secret Service scandal because, as Maher argued, the media is so obsessed with sex they should be starting all of its coverage of the scandal with “Dear Penthouse.”

RELATED: O’Reilly Asks Advocate Of Legal Prostitution: ‘Why Can’t They Get A Legitimate Job Like 99% Of The Population?’

Maher explained that while watching the network news evening broadcasts on Monday night, he saw a lot of interesting but ultimately not-too-compelling human interest stories coupled with more sensationalist coverage of the latest details in the Secret Service scandal. He noticed that much of the coverage was just an excuse to show women in bikinis on television and call it “breaking news.” But Maher observed this as a larger pattern of sexual deviance being the only type of scandal Americans can truly get their heads around.

He claimed that despite everything Newt Gingrich and Herman Cain said and did on the campaign trail, the one issue that garnered the most attention for the two men were their sexual indiscretions and rumors and allegations. And Maher even called out the media for its disturbingly in-depth coverage and demand for the facts in the John Edwards trial, but not just for the coverage of his scandalous life. He’s facing charges over some illegal campaign financing, but Maher argued that he was just a scapegoat for bigger fish like the Supreme Court and Citizens United.

But back to the salaciousness of our media landscape, Maher asked the question that many people would probably like an answer to (perhaps during some celebrity-style event where journalists will be hobnobbing with the very people they like reporting on for their salacious coverage).