Bill Maher: “Why Is Obama Such A Bad Negotiator?” 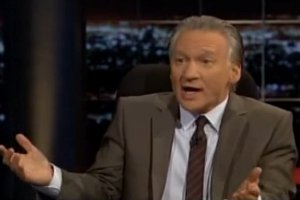 President Barack Obama’s budget plan has its share of critics, including lawmakers on both sides of aisle who feel it insufficiently deals with rising costs of entitlement programs like Social Security. It’s safe to say the plan has another critic in Bill Maher, though as Maher explained on tonight’s Real Time, it’s for a different reason.

While a good number of Congressional Republicans would likely argue that Obama’s budget doesn’t come close to sufficiently addressing their greatest concerns (i.e. the rising costs mentioned above), Maher – not to mention guest Tavis Smiley – said Obama gave Republicans too much of what they wanted. Smiley slammed the president for “capitulat[ing]” on tax cuts, and Maher said, in a half-question, half-lament, “Why is he such a bad negotiator?” Smiley said Obama “gives [Republicans] everything up front” (fellow panelist Michelle Caruso-Cabrera disagreed with that one).

Maher continued that Obama’s budget reflects nothing more than “another desperate attempt to make Republicans like him,” and uses logic amounting to, “We have to tighten belts, so let’s do it with kids, poor people, and the planet.” Panelist John Heilemann disagreed with Maher in one key area, however – he didn’t think Obama’s budget showed a lack of negotiating skill so much as it showed that he agrees with Republicans more often than Maher does. (Maher wasn’t buying it.)

Neither was Smiley, who used Obama’s abandoning the public option during the health care debate as an example of Obama giving in on something he believed in, and used a pretty harsh phrase in describing Obama’s governing policy:

“We all know that campaigning and governing are two very different things, but that’s not what [Obama] told the people. That’s not what he said when he ran for office, that’s not [what] he sold this bill of goods – hope and change – about.”

It’s pretty clear that, even if Obama has the 2012 election as in the bag as Maher thinks he does, he’s got a long way to go to appease many of those who’ll likely vote for him – and in many cases, will probably never succeed. Video below.