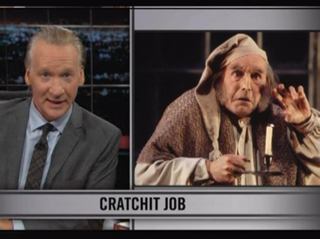 Last night marked the end of the season for Real Time, at least for the rest of the year. So given that Bill Maher wont be around for the holidays, he delivered his Christmas message early: a reminder to Republicans that Ebenezer Scrooge was actually supposed to be the bad guy in A Christmas Carol, not a role model.

In his “New Rule” segment last night, Maher argued that Republicans “hate everything about Christmas,” that charity and brotherhood “makes their skin crawl.” He noted there was a part in the book in which Scrooge “suggests that if the poor don’t want to go to the work house, they should get on with dying as a service to population control– if Herman Cain said that at a Republican debate he would get a standing ovation.”

He then turned to his other problem the Republican arguments, not that they were anti-Christian, but rather lazy to him. “I find it ironic that Republicans have such disdain for the lazy, and yet their solution to every problem is ‘do nothing,'” he argued, “for a group of people so head over heels about self-reliance, they sure to recommend a lot of sitting on their ass.”

Maher then returned to the matter at hand– A Christmas Carol— and told the tale from the perspective of a Republican: “the hero, Scrooge, a blameless job creator, is turned into a socialist through the corrupting influence of Tiny Tim.” And that they seemed to continue on the path away from charity, to Maher, meant “that’s where this party is, it has no bottom– except Marcus Bachmann.”

RELATED: Bill Maher: Perry’s Gaffe Was Not Forgetting Agencies To Cut, It’s That He Wants To Cut Agencies