Maher’s New Rule: Atheism And Religion Are ‘Not Two Sides Of The Same Coin’ 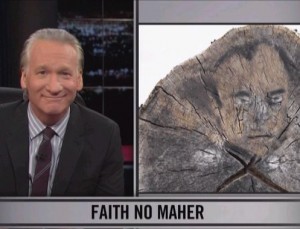 In his final New Rule of the night, Bill Maher disputed the idea thrown out by some that atheism is a religion. It’s a refrain you hear from people who can’t stand both groups and believe that dogma is dogma, plain and simple, but Maher argued that treating atheism like a religion would be like saying “abstinence is a sex position.” After all, when was the last time a non-believer ever claimed to see the silhouette of Christopher Hitchens on the side of a tree?

RELATED: Bill Maher Round Table Discusses The Dangers Of Religion

Even though Maher produced a documentary four years ago whose title was literally a portmanteau of “religion” and “ridiculous”, he admitted that atheism isn’t even a hobby of his. “That’s the nice thing about being an atheist, it takes up so little of your time,” he said. But Maher expressed concerns about the “growing trend” of people trying to equate religion, which is based in faith and things claiming to be beyond normal human comprehension, with evidence-based science. Charles Darwin may look like the kind of person we’ve always pictured a god to be, but when was the last time someone organized meetings or built huge buildings in reverence to Darwinism?

Maher did concede that atheism is not necessarily a bastion of pure intellectualism, but equating belief with “nonbelief” is not rational thinking.

“We’re not two sides of the same coin, and you don’t get to put your unreason up on the same shelf with my reason. Your stuff has to go over there, on the shelf with Zeus and Thor and the Kraken, with the stuff that is not evidence-based, stuff that religious people never change their mind about, no matter what happens.”

Maher said he would be perfectly willing to believe in a god or Jesus if there was any evidence to back up their existence, but until he sees any sign that they exist, he’s perfectly content to stay on the side of doubt. But, Maher concluded, if people are going to keep insisting atheism is a religion, then atheists should logically be able to get away with the same things religious people do on a daily basis. He brought up how Mitt Romney‘s late father-in-law was posthumously baptized, and donned a magician’s hat to perform an “unbaptism” ceremony. An unbaptism, for those unfamiliar with the practice, is very much like an unbirthday, except with far less tea.

Maher mumbled a string of nonsense words, including what I’m pretty sure was a line from Harry Potter, and finally declared, “I call upon the Mormon spirits to leave your body the fuck alone.”