Bill Maher’s New Rule For GOP: You Must ‘Admit The Historical Existence Of George W. Bush’ 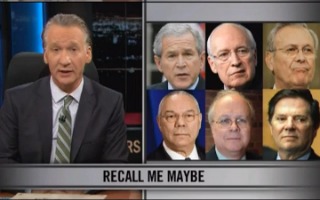 HBO’s Bill Maher has proposed a new rule for Republicans: The party doesn’t have to accept evolution, economics, climatology or human sexuality… but it does have to “admit the historical existence of George W. Bush.”

“If your party can run the nation for eight years, and then have a national convention and not invite Bush, Cheney, Rumsfeld, Colin Powell, Karl Rove or Tom DeLay, you’re not a political movement,” he joked. “You’re the witness protection program.”

Although, to be fair, the former president’s brother, Jeb Bush, did indeed mention his brother in his RNC speech, and both George W. and George H.W. Bush participated in a video shown during the convention.

RELATED: Jeb Bush Scolds Obama For Blaming His Problems On His Brother

As for former VP nominee Sarah Palin… Maher asked whether — even if conceiving her was a mistake — the party isn’t morally obliged to bring her to term. Badda-bah badda-bum. BUM!

If we went by what the GOP said this past week, Maher continued, you’d think the founding father received the Constitution directly from Jesus, the Republicans have been fighting for the black man ever since the days of Lincoln, and “St. Reagan” imparted upon the party “the ability to completely forget.”

“How can we trust Republicans with the future,” Maher asked, “when, as far as I can tell from Tampa, the world ended the year Reagan left office? Like, in 1988, we just all fell into a deep sleep listening to ‘Pour Some Sugar On Me,’ and when we woke up Monday morning, Obama and his negro army had wrecked the joint.”

Have a look, via HBO: