Bill Nye to CNN: We Don’t Deny Cigarettes Cause Cancer, So Why Deny Climate Change? 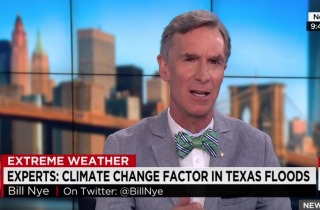 As this week brought 20-plus inches of rain, tornadoes, and severe flooding to parts of Texas and Oklahoma, killing more than 20 people, some major media figures have taken to noting a connection between the storms and anthropogenic climate change. Bill Nye‘s reaction caused quite a bit of controversy with his detractors, and so on Friday morning, he responded via an appearance on CNN Newsroom.

“Bill Nye “The Science Guy” is here, ready to fight the haters,” host Carol Costello introduced him. “You tweet about climate change after extreme weather events all the time, and each time it makes climate change deniers freak out. Is this your strategy?”

I just want to remind voters that suppose you had somebody running for congressional office in your district who insisted there was no connection between cigarette smoking and cancer. Would you vote for that person? You might, but if this person were adamant — ‘No, the scientists who studied cigarette smoking, they don’t know what…’ — if they were adamant, would you vote for them? And so, in the same way the connection between climate change and human activity is at least as strong as cigarettes and cancer. And so, I just want everybody to keep this in mind: that it’s very reasonable that the floods in Texas, the strengthening storms, especially — the president was in Florida — these things are a result of human activity making things worse. It’s very bad. I get this that people died in Texas, and I am reminding you what else. This is a very expensive business. When you flood the fourth largest city in the United States, somebody is going to pay for it, and it’s you and me. And so, the sooner we get to work on climate change, the better.