Bill O’Reilly: French Ban On Religious Veils Are A Move Against ‘Muslim Ghettos’ 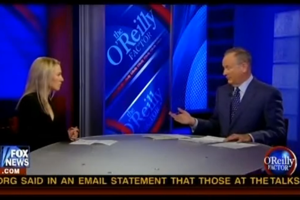 Bill O’Reilly went international for a segment last night to analyze tension between Muslims and the governments of France and England, especially in light of French President Nicolas Sarkozy proposing a ban on Muslim veils for women.While Sarkozy has claimed it is both a security and women’s rights issue, O’Reilly proposes that it is a reaction to exclusively Muslim neighborhoods forming outside their large cities.

O’Reilly had guest Imogen Lloyd Webber on the show to explain the reaction to increased Muslim populations in France and England, who found bans on religious garb anti-democratic and counter-productive. O’Reilly added that the veils were not just religious items, but cultural ones, and that the proposed ban was not related to women’s right (a claim he called “bull”) or even religion, but a fearful reaction to growing Muslim communities:

The French are very worried about these ghettos, these Muslim ghettos, particularly outside of Paris, where the Muslims come to France– and they do this in England as well– and they don’t integrate into society. They stay in their own little neighborhood, they do their own little customs, just like they would do in Bahrain or where else, and the French don’t like it.

O’Reilly also suggested that, while he didn’t see the ban on veils happening in Britain or the United States, that would all change if someone used the veil to perform a terrorist act in either country, something Webber considered dangerous to democratic values.