Bill O’Reilly On Christian Candidates And The Secular Press: It Drives Them Crazy 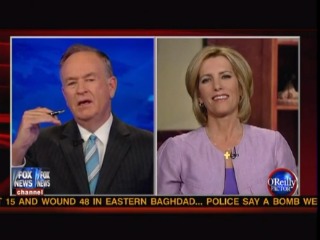 On Thursday’s The Factor, host Bill O’Reilly looked into Rick Perry‘s recent decline in popularity. He showed a clip of Perry’s wife telling a crowd in South Carolina that her husband’s campaign had been “brutalized and eaten up and chewed up” by the press and, again, “brutalized” by his opponents… because of his faith. An interesting take given Perry is currently dealing with fallout from the fact that a pastor, Robert Jeffress, introduced him at the Values Voter Summit earlier this month by calling him a “committed follower of Christ” as opposed to Mitt Romney who, as a Mormon, belongs to a “cult.”

I think she’s right — it’s been a really tough month for him. And, as his wife, I mean, she’s probably hurting for him. And the truth, I think, about this is that, when you get in this race, as Michele Bachmann found, as, last time around, Mike Huckabee found, as Sarah Palin found when she was the vice presidential nominee, the media and, yeah, other conservatives, are going to be really hard on you. They’re going to scrutinize your record, they’re going to look at you on the stage alongside other candidates, and you’re going to have to match a standard of excellence that makes people feel reassured about your abilities beyond governing your state and beyond your record in the state that you’re in. So I don’t think it really has anything to do with his faith. I think it has everything to do with the comfort level that people want to have with Rick Perry and I think, look, by the polls, we knew that there were a lot of people who wanted Rick Perry to kind of soar from the very beginning. But he has to take himself across the finish line.

As O’Reilly sees it, however, anyone of faith is going to get “raked over the coals” by the “secular press” and the Perrys should have anticipated and been prepared for this reality. “The Christianity thing, believe me, that makes them, the New York Times people, it makes them crazy.”

Watch their discussion — which also includes a look at Herman Cain — via Fox News: