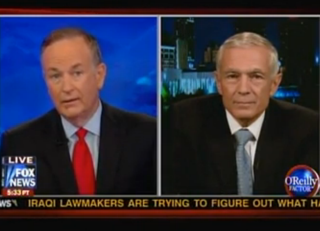 President Obama’s announcement tonight that he would be withdrawing 33,000 troops from Afghanistan within the next year may come as good news to many who wish to see an end to the conflict, but the fact that his timeline for withdrawal is faster than that proposed by Gen. David Petraeus has Bill O’Reilly concerned about whether President Obama could escape being labeled an opportunist reacting to political forces rather than a commander in chief acting in the nation’s interest.

O’Reilly asked guest Gen. Wesley Clark for his opinion on the matter, particular after Gen. Clark’s praise of Gen. Petraeus, and his point that Afghanistan is not like Libya, in which there is “no vital American interest.” Gen. Clark argued that the President must look at a “broader, deeper picture” than what Gen. Petraeus faces that may make him choose to withdraw earlier, especially since the mission– “to go after Al-Qaeda”– had been very successful.

O’Reilly disagreed on the nature of the mission, arguing that Taliban chief Mullah Omar had “given us the proverbial finger” and that the true mission was “to remove the Taliban from power,” and with the withdrawal, it was possible for them to come back. “If Gen. Petraeus says to me ‘You need another year at full strength,'” O’Reilly argued he would listen to the general, otherwise, “it looks like President Obama is playing politics… looking out for himself for reelection purposes.”

Ultimately, Gen. Clark ceded the point that Gen. Petraeus was to be listened to without relenting that President Obama had a different perspective from which he was assessing the situation that would make his decision possibly correct regardless of what Gen. Petraeus says. “No general in command wants to give up command of a third of his troop strength for other reasons,” he noted, which would put Gen. Petraeus in a position that would not permit him to request fewer troops on the ground.