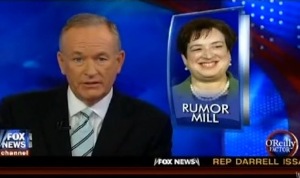 Last night Bill O’Reilly addressed the rumors that surround the sexuality of Supreme Court nominee Elena Kagan with Washington Post columnist (and certified Beltway insider) Sally Quinn. The interview featured some odd miscommunication; Quinn blamed the White House for initially insisting that Kagan is not gay (because they don’t know for sure), to which O’Reilly responded “Americans have a right to know if their Supreme Court Justice has an orientation that may or may not dictate which way she votes on a vital issue.”

Warning – regular readers of Mediaite’s coverage of this story will watch the following clip and may feel as though they’ve entered some weird time travel/twilight zone. From the first CBS News blog post that questioned Kagan’s sexuality a few weeks ago right up until the news of Kagan’s friends claims that she is straight, the O’Reilly segment feels like a recap of much of what we’ve published since this story broke.

To his credit, O’Reilly has very often shown tolerance and acceptance for many gay rights issues (save some biggies like gay marriage.) But despite a history of tolerance, last night’s interview seemed to have one message for O’Reilly’s traditional viewers: Elena Kagan might be a lesbian and Americans need to know this because it’s germane to how a Supreme Court justice nominee might vote on an issue. The back and forth can best be summed up by the following exchange in which, ironically, Quinn cited a classic bon mot from the conservative playbook:

Quinn: My feeling is that her private personal life, as long as it doesn’t get in the way of anybody else is her business.

O’Reilly: How do you know it doesn’t get in the way of her judicial decisions?

Quinn: Well, you know, you could argue that the conservative argument is that basically what you need to do is to follow the law. and that’s all that matters.

Quinn: Follow the constitution. that’s all that matters. if she does that than anything else does matter.