Bill O’Reilly: Al Franken Is “Why The Far Left Is Despised”
video

Bill O’Reilly: Al Franken Is “Why The Far Left Is Despised” 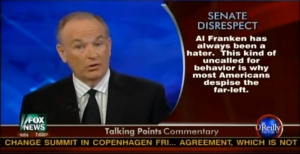 On his Friday show, Bill O’Reilly went after an old favorite target of his, the former comedian and now senator from the state of Minnesota, Al Franken. The bespectacled liar-hater has most recently been in the news for quieting the, uh, polarizing Sen. Joe Lieberman on the floor of the Senate on Thursday, breaking custom by not granting his buddy Joe another few minutes to wrap up.

Franken’s actions, according to O’Reilly, shouldn’t surprise anyone: “The man’s a hater — always has been,” the host said, “but it illuminates why the far left is despised by most Americans.”

Lieberman, O’Reilly said, is just “an honest man” and there is “no reason on earth” he should not have been allowed to finish, except of course that he was out of time and everyone left of Charlton Heston is calling for his head. O’Reilly called Franken’s flexing of power “mean, petty and disrespectful” — it was most certainly petty — but used the Senate scuffle as a jumping off point for a classic rant about cruel liberals. It seems to be a bit of an overreaction considering the constant PITA Lieberman has proved to be for the blue guys. But to O’Reilly? Unforgivable!

“Just look at their websites,” O’Reilly said. “Look at the savages spewing venom on cable television.” Wait, wait, wait — no, he was not talking about Fox News, Glenn Beck, Sean Hannity or… himself. Nor was he speaking of Power Line or Free Republic or Red State. This is about Daily Kos, Barney Frank and Al Franken. And you, you baby-killing, old man-tripping savage hippie!

“Yes, it’s true, the right does some of that stuff as well,” he said, almost adequately covering his tracks, “but not nearly as much as the far left. I see the transcripts, ladies and gentleman.” And the transcripts, now those do not lie!