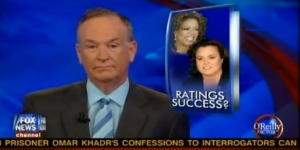 This week, the news broke that one of the signature shows on Oprah Winfrey’s will be hosted by Rosie O’Donnell. On The Factor last night, Bill O’Reilly and Bernie Goldberg put on their prognosticator hats to try and determine whether this move will be a success or a disaster. First though, they had to try and wrap their heads around the shocking thought that some people actually find Rosie…*GASP*… likable.

It’s no secret that O’Donnell’s political feelings swing pretty far the left and O’Reilly theorized that that would spell doom in this “center/right” country. Goldberg, however, defended the choice, pointing out that you don’t make as much money as Oprah does by not thinking your moves through. He guessed that Winfrey probably had a deal in place with O’Donnell to keep the future host from saying anything to inflammatory on her show. However, just because he defended Winfrey’s decision to hire O’Donnell, didn’t mean he was going to defend O’Donnell herself. Oh, no.

“I want to make clear that, when it comes to politics, Rosie O’Donnell is a fool. She may fancy herself a political sophisticate of sorts; she’s not. She thinks 9/11 was an inside job. She has said that radical Christianity- whatever that means- is as threatening as radical Islam. I don’t think so. And she has said, and I want to read the direct quote, that we shouldn’t fear the terrorists, ready for this, ‘because they’re mothers and fathers.’ Rosie O’Donnell’s main contribution to our culture is that she mainstreams both stupidity and hate.”

“Main contribution to our culture?” Clearly Goldberg has never seen this great (and greatly NSFW) scene from Beautiful Girls.