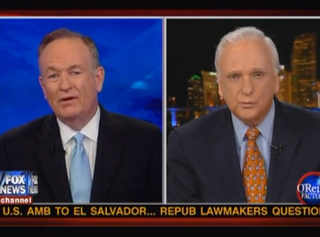 CNN contributor David Frum caught Bill O’Reilly‘s eye yesterday on Reliable Sources, when he went after Fox News for being a bad influence and agent of misinformation in the 2012 election. O’Reilly didn’t understand Frum’s “beef” with the network, but Bernie Goldberg had an answer: Frum was merely “an intellectual who is frustrated because he doesn’t have the clout that you have.”

“Not that he’s an important guy, Frum,” O’Reilly noted as he asked Goldberg for analysis, but did not that it was a strange attack coming from a conservative. “They seem to be mad at Fox News,” he suggested. Goldberg had an answer to why this was the case: “there are two kinds of conservatives… intellectual conservatives, or something close to that– they don’t like the riff-raff.” Goldberg argued Frum was one of these intellectuals, and almost seemed sympathetic when asking O’Reilly rhetorically, “could you imagine how frustrating it must be to be an intellectual” who realizes “the riff-raff have more of an influence on politics and culture?” “They resent the fact that Fox News is an important player in the culture and, by and large, they’re not,” he concluded.

O’Reilly added that Frum’s specific comment that Fox News viewers were more misinformed than others was symptomatic of a type of political thought of people who “just believe stuff they hear because they want to believe it,” comparing it to those who believe President Obama is a Muslim or Vice President Cheney went to war because of Halliburton. Goldberg agreed, but returned to the central point that it was not just that thought process but a desire to be influential that fueled Frum.

RELATED: Bernie Goldberg And Bill O’Reilly Disagree On How Vulgar Jon Stewart And His ‘Cute Little Smile’ Can Be

Goldberg then ends the segment with some “unsolicited advice”: “if the White House goes after you, the New York Times… somebody important,” he suggested it was wise to attack; “if an intellectual who is frustrated because he doesn’t have the clout you have [attacks]… he’s not worth going after.” O’Reilly convinced him, however, that the attack was merited because it spawned the “fascinating” segment he just ended, a point Goldberg conceded was valid.