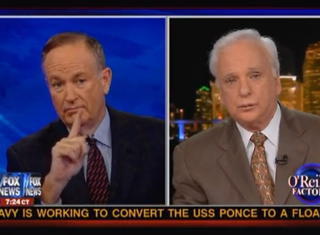 Bill O’Reilly and Bernie Goldberg aren’t usually the ones first in line to heap praise upon their competitors over at CNN, but last night they had nothing but good words for Wolf Blitzer‘s performance as moderator of CNN’s latest Republican debate, particularly in shutting down Newt Gingrich. Unlike John King, who Goldberg suggested was trying to “start a food fight” with his question on Gingrich’s marriages, both host and guest agreed that Blitzer was attacked for asking a legitimate question, and that the audience at home was on his side.

RELATED: Wolf Blitzer Tells Anderson Cooper Why ‘He Didn’t Back Down’ To Newt Gingrich

“You know that the CNN suits told Blitzer… ‘if [Gingrich] comes after you, you better slap him back– no more John King stuff,” O’Reilly told Goldberg, adding that Blitzer did a “pretty good job” of telling Gingrich, “don’t give me any garbage.” Goldberg agreed, adding that “it is legitimate to go after a reporter or moderator if he asks you an unreasonable or unfair question that shows his own biases,” but that Blitzer had not done that. Goldberg also noted that the audience booed Blitzer, but considered it a “reflexive reaction” towards the mainstream media, because Blitzer “did absolutely– in my view– nothing wrong.”

While those in the audience did boo, O’Reilly countered that “the people at home, I don’t think that they were mad at Blitzer” because Gingrich had raised the issue himself in other interviews, and it was a legitimate one. He then turned to King’s question about Gingrich’s open marriage, and noted that he would have approached it much differently. “I would not have asked that question at the top of the interview [sic]… and when I did ask the question, I would have framed it this way,” O’Reilly explained, not mentioning the accusation and asking instead, “do you feel it’s going to hurt your campaign?”

“John King was trying to start a food fight,” Goldberg replied, noting that if King had brought the subject up at the end of the debate “that would have been Newt Gingrich’s problem” if he was upset. Gingrich’s attack the media tactic, Goldberg concluded, does not work if “you’re picking at every little thing.”