Bill O’Reilly And Glenn Beck Agree: ‘Herman Cain Is Through’ 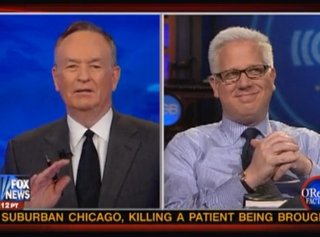 After several months since being reunited on camera, Bill O’Reilly hosted GBTV head Glenn Beck tonight for a chat on the current state of affairs in the Republican primary. While they differed on the chances Rep. Michele Bachmann makes a comeback (and even on whether they should care), one thing they were in sync on were Herman Cain‘s odds: “it looks like Herman Cain is through.”

RELATED: Bill O’Reilly On New Allegation: ‘I Don’t Think Herman Cain Can Survive Any More Of This’

“The problems in our country aren’t going to be fixed by politics,” Beck told O’Reilly, noting that who wins the presidential election will not have as big an impact as other things on the nation’s path. He did agree with O’Reilly, though, that “Herman Cain is through,” leaving the election to be a “battle of big government Republicans” Mitt Romney and Newt Gingrich. O’Reilly teased him by bringing up Rep. Ron Paul as an example of the alternative, which Beck called a “as close to a no government Republican as you can get,” unlike his choice, Rep. Bachmann.

Given his endorsement, O’Reilly asked Beck why he thought Bachmann wasn’t making a rally in the polls after Cain and Rick Perry faltered. Beck said he didn’t really know, but that in listening to all the candidates, the only ones that had the “Abraham Lincoln or George Washington” character to them were Rep. Bachmann and Rick Santorum. O’Reilly noted that “it’s not going to happen for the Congresswoman,” culminating in Beck replying, “that’s the one thing I don’t care about in politics.”