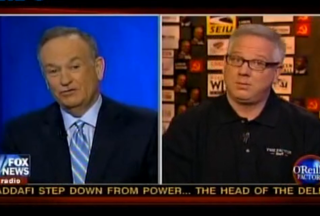 Van Jones is back! The former White House Green Jobs Czar who will forever be remembered as Glenn Beck‘s first arch-nemesis has organized a massive, national pro-union rally in solidarity with the protesters in Wisconsin, and Beck, of course, has an elaborate, hammer-and-sickle-laden chalkboard for that. Bill O’Reilly last night to explain why Jones’ American Dream (and Woodrow Wilson‘s) is a menace to capitalism, and how this “impromptu” protest has been years in the making.

O’Reilly began the weekly discussion with a chat on “your pal Van Jones,” whose name prompted Beck to immediately brandish a book by Woodrow Wilson in which the phrase “American Dream” was coined. “In 2008, they started talking about this,” Beck explained, “this” being the “restoration of the American Dream.” “It’s not what you think it is,” he warned. O’Reilly, as is usual when Beck goes on Wilson-inspired tangents, was unimpressed. “I’m not worried about this,” he admitted, “I don’t think this sways public opinion.” “I’m not worried either,” Beck countered, “this is just the other side of the movement.”

On that note, O’Reilly commented that while “Van Jones doesn’t scare me,” Imam Yusuf al-Qaradawi does (Qaradawi was spotlighted in a recent episode of Glenn Beck for anti-semetic comments). “It doesn’t seem that the White House has any urgency in this,” O’Reilly noted, highlight Qaradawi’s “sold-out” speech in Tahrir Square in Cairo after the dust began to settle on their revolution. Beck agrees on the White House, beginning to ask himself why the President did not mention Gaddafi in his Libya speech. O’Reilly cuts him off right before he answers his own question– maybe because he already knows the answer to that one is a bit of a stretch.