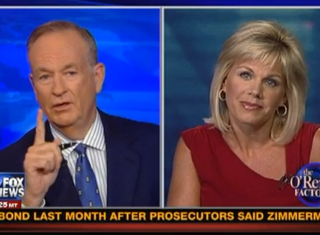 On her MSNBC program this evening, Melissa Harris-Perry took the time to discuss some of the darker sides of American history– the fact that 1996 was not a day of independence for many minorities and women, and that it took a lot of work to come to the place we are today. On tonight’s Factor, Bill O’Reilly took Harris-Perry to task as pandering to an audience that “hate[s] the country [and] want to break it down,” with Gretchen Carlson asking why someone would bring this up on such a special day.

After replaying part of Harris-Perry’s weekend monologue on how many both benefit from and suffer due to residual effects of the atrocities committed early in this country’s history, O’Reilly responded that “every nation on this earth has on their historical background atrocities,” and that “historically, she is not wrong.” Carlson agreed, but argued that she was being inappropriate to discuss it on this week, the nation’s birthday. “On the Fourth of July, do you think any American really wants to hear the negatives about this country?”

O’Reilly replied that “the people who watch that network do” because “they hate the country, want to break it down,” and they would hear bad things about America at any time– “on Christmas, on Halloween, on any day.” He joked that asking them to celebrate America annually would be “like asking far left people on one day of the year to celebrate Bill O’Reilly.”

“On the Fourth of July, I was focused on being with people I love,” Carlson replied, and that she told their children they were “darn lucky to live in this great country of ours and if they work hard, they too can achieve the American dream.”