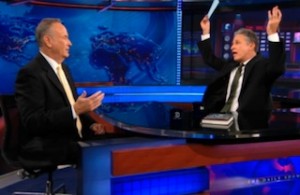 As part of a lengthy promotional tour for his new book Killing Lincoln, Fox News’ Bill O’Reilly appeared on The Daily Show for a spirited and respectful discussion, with host Jon Stewart, of the current political rhetoric. Government spending, tax rates, and the price of Government-bought muffins were the topics of the conversation in the segment that aired, but as is often the case with interesting TDS interviews, the second segment, saved for Internet-only release, was more interesting that the first.

There is no question that O’Reilly and Stewart are each at the top of their game; both are remarkably influential in forming opinions with their (mostly) partisan audiences, and curry the favor of what many see as their ideological foes. So when these two dominant primordial beasts of their own political ecosystems meet, one might expect sparks to fly, but to their respective credit, there is far more respect in their dialog than animus.

Though it may seem hackneyed to point out, it’s important to remember that the current opinion media landscape is populated by television personalities whose stock-in-trade is anger, delivered with a strident and obstinate perspective. Yes, in many ways, Bill O’Reilly is the progenitor of the form, but as I’ve pointed out repeatedly here on Mediaite, his non-doctrinaire avoidance of politically expedient talking points has made him something of a breath of fresh air. And while Jon Stewart’s repeated claims that, as a comedian, he falls under a different set of rules, he too has been unafraid to criticize sacred cows of the left, although he’s seen by many as the opinio-media leader of the progressive movement.

In the first segment which aired on the TeeVee last night, O’Reilly came out of his corner swinging at what he feels is this administration’s incompetence with managing the federal budget, citing Solyndra, as well as reports that the U.S. Government was bilked by some D.C. baker who charged $16 a muffin. Typical populist pablum that still makes a salient point.

The second segment, however, was the far more interesting debate over tax rates (O’Reilly appears to be for raising revenue via a consumption tax), as well as charges from the right that President Obama is playing “class warfare” by asking the super-wealthy to return their tax rates to that which they paid in the ’90s. This was the point made by Stewart, which earned a generous applause from his loyal studio audience, which in turn led to a victory dance.

Watch the segment that aired on television below, courtesy of Comedy Central (followed by the second, Internet-only segment):