Bill O’Reilly And Kirsten Powers Destroy ‘Narcissistic’ Barney Frank: ‘Shut Up Until The People Are Buried’ 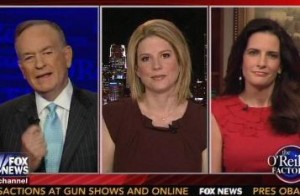 Bill O’Reilly was on fire tonight as he reacted to former Congressman Barney Frank using the Boston bombings in order to make a political point about taxes. Frank not only said that tax cuts would have made recovery efforts worse, but he also opined that the reaction was “greatly hyperbolic” and stated, “this isn’t the end of the world.” O’Reilly could not hide his outrage at Frank, calling him a “left-wing bomb thrower” and said he needs to “shut up until the people are buried.”

RELATED: Frankly Foolish: Barney Frank Should Try Telling Parents Of 8-Year-Old Boston Victim ‘It’s Not The End Of The World’

Frank’s comments were so shocking, he was called out while making his overtly political point on MSNBC, but anchor Thomas Roberts was restrained in how he handled the situation. O’Reilly declared he “would have yelled” at Frank had he agreed to come on the show, and said he’s getting fed up with people trying to politicize the terrorist attack. Kirsten Powers agreed, noting that even if Frank had waited a week or so before weighing in, his comments would still have been horribly inappropriate since he was using a tragedy to “set… up a caricature of Republicans.”

O’Reilly called Frank a “left-wing bomb thrower” who clearly knew what he was getting into with his provocative comments. Powers said this was doubtful, arguing that he may very well have this sincere belief about taxes providing for police and public service. If this was the case, O’Reilly said, then Frank should “shut up until the people are buried.”

Kate Obenshain noted that Frank probably “loves the fact” that O’Reilly is responding to him with such outrage. She blamed Democrats and liberals for trying to score political points, even going so far as to blame sequestration. O’Reilly agreed that all of the politicizing is coming from the left, though he did take issue with Obenshain’s argument that President Obama politicized Newtown.