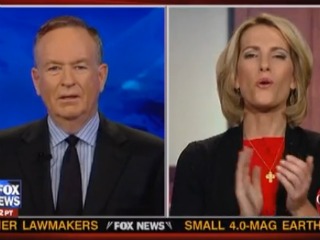 On The Factor Thursday night, host Bill O’Reilly and guest Laura Ingraham discussed the Occupy Wall Street movement, noting that it doesn’t appear to be quite as “spontaneous” as it initially seemed. O’Reilly played footage of a woman named Safia Albaiti – an Occupy Boston protester and member of the International Socialist Organization who spoke out about how wars are an inevitable part of a “system” that needs to be eradicated.

“But,” asked O’Reilly, “what does that have to do with Wall Street?”

RELATED: Wall Street Journal Debuts ‘What Percent Are You?’ Toy

O’Reilly offered a theory about the protests: These aren’t about Wall Street or the economic justice. These protests are, rather, an amalgamation of anti-capitalistic, anti-American people. Ingraham agreed:

Well Bill, most of these people, I would submit, don’t even know the rudimentary teachings of capitalism. I think they’ve heard about capitalism and they think it’s something… they don’t really know what it is because they’re all punching out their Tweets on their iPhones and they’re getting big trucking companies to bring in their free sleeping bags and they have huge restaurant, you know, groups bringing in free food. And these are all companies, these are all part of the free market. And they’re all kind of, like, supporting them. So, the idea that its anti-capitalist, I think you’re right. There’s a deep strain, and it’s a nutty strain, and it’s very helpful to the Republican strain of deeply anti-American folks down there.

The two did agree, however, that there are some people involved in the protest who have very valid and serious concerns about the economy and are seeking reasonable economic reform.

…Unlike in, say, Athens, were the fringe, far left force has taken over and the city finds itself contending with violence and chaos.