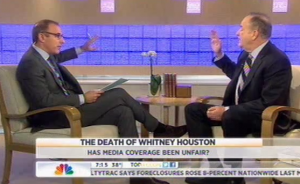 Fox News’ Bill O’Reilly was a guest on Thursday morning’s TODAY show, and got into a relatively heated discussion with host Matt Lauer when the topic of Whitney Houston‘s death came up.

Lauer brought up O’Reilly’s earlier comments, when he said that Houston had wanted to kill herself, because of her constant abuse of drugs.

O’Reilly said the media looked the other way while Houston was addicted to drugs “for two decades.” When Lauer said that there were plenty of stories about Houston’s addiction, O’Reilly countered that they were just sensationalized accounts.

“You know what we in the media do, Lauer?” O’Reilly asked. “We wink wink it, we Snoop Dogg it. We Willie Nelson it. Hey, oh yeah, they’re stoned. That’s fine. And what message does that send? It’s okay!”

Lauer said that it was apples and oranges, saying that the media did highlight Houston’s problems.

“They exploited it!” O’Reilly exclaimed. “Name me one media commentator outside of myself who said, ‘Hey Whitney, you better knock it off or you’re going to be in the ground. Give me one!”

The two went back and forth on the coverage of Houston’s addiction before Lauer suggested, “Let’s move on a little, because you and I could do this for hours,”

Watch a clip of the interview below, courtesy of NBC: