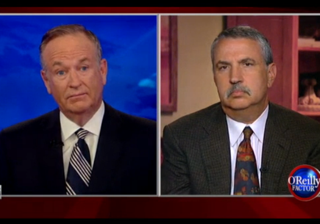 With the economic crisis– particularly the dire jobs situation– paramount in the headlines of what is wrong with the nation today, last night Bill O’Reilly dedicated a segment of his program to debating the faults of our infrastructure and the likelihood of President Obama doing anything about it. O’Reilly faced off with New York Times columnist Tom Friedman on the amount of spending necessary, the former concluding that “pouring more money” into problems was simply not the solution.

“The only thing we can do is invent our way out of this,” Friedman argued, noting that neither tax decreases nor plenty of government spending would solve the economic problem. The question for Friedman was how to figure out a way to “get more people starting companies.” O’Reilly agreed, though noted that “some people believe the private sector has to be let loose to do that.” Friedman didn’t concretely address the spending, but noted that education was a very important sector in which the government could work, as the worse students did in school, the more skilled labor would leave the country.”

O’Reilly agreed, but, as a former high school teacher, argued that more regulation was not the answer. “The problem here is bad parenting… their parents are lazy, derelict… they don’t encourage reading,” O’Reilly noted, which were problems a schoolteacher has very little control over. Friedman agreed in part, but continued to argue the point that “we need better teacher, we need better neighbors,” even in neighborhoods that didn’t have many children. “But you can’t force parents to be responsible,” O’Reilly countered, “and that’s where it always breaks down.”

Friedman and O’Reilly also discussed the growing anger in America, which Friedman said he understood. “I’m from the Midwest, I get the anger. I feel some of it myself,” he argued. He also gauged the President’s chances for reelection, which he argued hinged upon whether the President “can come up with a program cutting spending, raising revenue, and investing in our success in a way people find credible.”