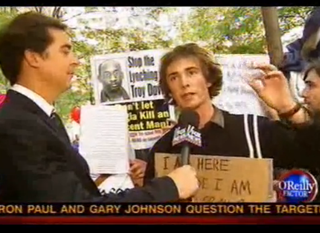 A large circle of vaguely left-wing, anti-capitalist protesters may not sound like the friendliest atmosphere to send Fox News film crews into, and yet Friday night was full of coverage from representatives of both The O’Reilly Factor and Hannity, which were treated slightly more warmly than the first crew to get down there led by Red Eye‘s Bill Schulz. Schulz accompanied Sean Hannity last night to make sense of the footage, which Jesse Watters gave his eyewitness testimony to Bill O’Reilly. Both arrived at a similar conclusion: the protests are entirely disorganized and slightly silly, but friendlier to Fox News than either group expected.

At the 8PM hour, O’Reilly’s main man-on-the-street Watters showed his package, in which he found very little sympathetic about the protesters– they mostly all agreed that “capitalism” was unfair, but with the exception of one protester how advocated for “communism” off-camera, most didn’t give him a clear substitute for what they were protesting against. He did, however, even hug one of the protesters, though he seemed to bring none of that sympathy to the newsroom, noting, “if you put every single left-wing cause into a blender, this is the sludge you’d get.” Segment via Fox News:


Hannity’s crew, which remained off camera, found similar sentiments: someone lamenting that “our democracy has really turned into capitalism,” a few people cringing while attempting to say that Hannity himself was “all right I guess,” and one bizarrely Tea Party-ish fellow saying something about “the Founding Fathers passing down the torch to the next generation” (this man also claimed to love Hannity, “but he doesn’t fit into my schedule”). Hannity brought Schulz in, along with Kimberly Guilfoyle, the latter which seemed genuinely revolted by the protesters and decried them as “people with absolutely no purpose or focus in life.” Schulz, meanwhile, noted that the smell of the place was “equal parts patchouli, body odor, and urine,” and, as the only recipient of actual hostilities at the protests, merely laughed off much of the rhetoric (but was thankful to receive a “Best Wardrobe Peabody” for his coverage). Hannity’s conclusion? All the talk the protesters were giving about class warfare came directly from President Obama. The segment via Fox News below:

While neither program was particularly comfortable with the protesters’ message– whatever that may be at this point– there is something hopeful about both packages, and even Hannity noted at the end of his segment that he spent time talking to one of the protesters and found common ground on which to agree. If Sean Hannity can get along with an anti-capitalist Wall Street protester, there is hope for humanity just yet.

Red Eye’s Bill Schulz Protests Against… Something At ‘Wall St. Day Of Rage’