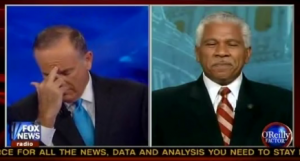 Ah, the Tea Party and the NAACP. Won’t those wacky kids ever get along? Last week, the story broke that the NAACP had partnered with liberal websites Think Progress, Media Matters, and New Left Media to create TeaPartyTracker.org, a website that tracks stories of racism and bigotry amongst the Tea Party. Tonight, the director of the NAACP’s Washington bureau, Hilary Shelton, appeared on the O’Reilly Factor to debate the merits of the site. Shockingly, Shelton and Bill O’Reilly disagreed on the subject.

Interestingly, if we had to choose a victor for the conversation (which remained refreshingly civil, by the way), we’d have to go with O’Reilly. At the offset, Shelton seemed perfectly reasonable and almost succeeded in making his case that the website was merely a way to make sure the Tea Party (which he stressed was perfectly within their rights to protest and hold events against the government) repudiated any extremists that get mixed in amongst their ranks. However, once O’Reilly asked him to list the offenses the site had found, he began to lose his way.

For some reason, Shelton could only think of an offensive t-shirt (presumably this one). While examples of racism in the Tea Party haven’t been nearly as prevalent as many on the left may have hoped a few months ago, a cursory look at the new site brought up a number of examples that would have been better than the silly one Shelton gave.

Since most of the rest of the segment was held up in semantics arguments over the definitions of “racist” and “hate speech,” Shelton never got a chance to recover. If he was hoping that this appearance would be his chance to show conservatives that the NAACP wasn’t needlessly picking on the Tea Party, then we’re going to have to say he failed.