Bill O’Reilly To Bachmann: Are You Treated Differently Than The ‘Eight Sweaty Men?’ 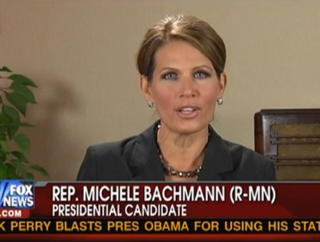 The 2012 presidential campaign has gotten particularly rough these past few weeks for Rep. Michele Bachmann, who has been on a downturn since she won the Iowa straw poll and Texas governor Rick Perry stepped into the race. With Perry taking a hit at last week’s debate, Rep. Bachmann visited Bill O’Reilly tonight with optimism about her campaign, and denying that the media treats her differently as a woman and not one of the “eight sweaty guys” competing against her.

Rep. Bachmann arrived at The O’Reilly Factor with a clear message to send to the base: that she was the only candidate in the race that could win without being a moderate. With Perry stumbling in the debate, Rep. Bachmann argued that voters “need to look for their champion, and I am the constitutional conservative in this race.” She declined to hit any of her opponents very hard in this interview– even with O’Reilly asking whether Perry was a “charlatan,” instead arguing that “people are saying now that they don’t want to settle” for a moderate, which benefits her.

O’Reilly then switched gears and asked her about the elephant in the room that distinguishes her from her opponents: “do you think you’re being treated differently because you’re a woman?” O’Reilly went on to explain that, compared to the “eight sweaty guys” that she is running against, she clearly stood out. “Not at all,” Rep. Bachmann replied, joking that “I grew up with three brothers and no sisters– that’s the best preparation for politics a girl can have!” O’Reilly seemed appreciative of her attitude, calling it “refreshing” and comparing it to Secretary of State Hillary Clinton‘s take on the matter in 2008.