Bill O’Reilly Asks ‘Who Is Running Sandra Fluke?’… It ‘All Goes Back To White House’ 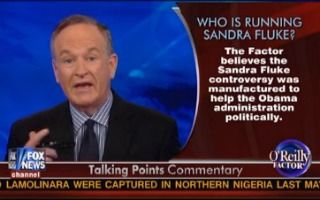 “Who,” Fox News host Bill O’Reilly asked on his program Thursday night, “is running Sandra Fluke?” He explained to viewers that The Factor believes that the controversy surrounding the activist and Georgetown law student has been manufactured in a calculated move to help the Obama administration.

The Factor is having some trouble, O’Reilly explained, tracking down who it is, exactly, that has been setting up Fluke’s media appearances. Just last week, he shared, his show called Fluke on her cell phone, inviting her onto the show. She has yet to call them back. “Very unusual,” said O’Reilly. “There was no other public contact for the woman, just her cellphone.” All the show has been able to gather so far, he continued, is that a man named “Mike” has booked her onto a few programs, but it has not been able to find out his last name or obtain his contact information.

“Why the subterfuge?” O’Reilly asked.

It turns out that Fluke is now being represented by a “progressive PR agency” named SKDKnickerbocker, where none other than Anita Dunn happens to be managing editor.

“Ah-HA!” O’Reilly announced. “So this whole deal comes back to the White House, at least indirectly.”

The host gave a brief synopsis of how Fluke ended up on our national radar, calling the controversy she has been linked to “completely bogus” because of the existence of Title X, which allows those who want to purchase birth control to do so for a mere 9 bucks per months at your local drugstore. (Nine dollars?! That’s cheaper than a sandwich in Manhattan.)

O’Reilly brought on radio host Laura Ingraham to weigh in further. Ingraham was surprised that Fluke, as a law student, is able to find the time to “jet around the United States” and talk about contraception.

He summed up his theory on what is actually going on with Fluke:

There is no doubt in my mind, in my investigator’s mind that this woman, from the very beginning, was what they call “run” by very powerful people. It’s not an accident that Elijah Cummings, Nancy Pelosi, all these people, got her and put her in a position to get national exposure.

But now we see, alright, that Anita Dunn and her firm have embraced her. Now, she appeared on NBC 1, 2, 3, 4 times, CBS once, CNN once — no, five for NBC — and The View also. And each of these times, alright, there was a shadowy booking process. Because I spoke to some of these people. […] She appears, she shows up. Somebody pays for all of that.

So I’m going to say — and I can’t prove it beyond a reasonable doubt, I think I will be able to — that this was run out of the White House. The White House ran this.

Check it out, from Fox News: