Bill O’Reilly: Why Does Bill Maher Get Away With Calling Qur’an ‘Hate-Filled Holy Book’? 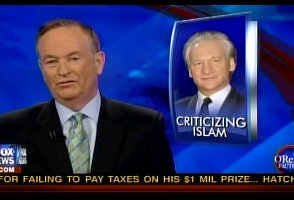 If you recall, Bill Maher had some harsh words for the Qur’an while talking to Rep. Keith Ellison (D-MN), a Muslim, on his program last Friday. Ellison contested Maher on this point, but in general, there wasn’t too much outrage over what really were some incendiary remarks on Maher’s part. Bill O’Reilly couldn’t help but notice the non-uproar, and took some time on tonight’s O’Reilly Factor to ask: why?

He had help from Mary Katharine Ham of The Daily Caller and Fox News Juan Williams (who, of course, has gotten into some hot water in the past over controversial remarks about Muslims, and yes, O’Reilly brought that incident up). Williams had a hard time believing that, say, Bill O’Reilly (or Juan Williams, for that matter) could get away with saying what Maher did about the Qur’an while causing so little controversy. Ham and Williams both agreed that Maher got away with saying it due to his general liberal bent.

O’Reilly, meanwhile, had two theories beyond “Maher’s a liberal, so he got away with it”: 1) the disaster in Japan lessened this item’s importance; and 2) “I don’t know how well-watched [Real Time] is.” Give O’Reilly this: he is a master at getting in digs at other programs’ ratings. He also wondered why Ellison wasn’t more vociferous in his displeasure with Maher’s comments, calling his defense “a little wimpy.”

While we’re a little uneasy with the idea of devoting an entire segment to lamenting how the other guy can say everything you want but you can’t…at the same time, we can’t fault O’Reilly too much. Because let’s face it – O’Reilly’s right that if he said what Maher did, a firestorm would soon follow, and when Maher himself said it…not so much. Video of the segment, via Fox news, below.