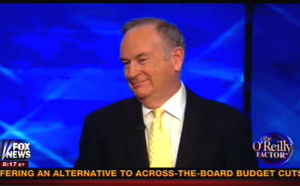 Remember the drone strike Justice Department memo publicly released this week? The one that lays out the exact legal authority by which the Commander-in-Chief can authorize a drone strike to take out American citizens? That very memo has been getting a lot of play in the media this week after the memo was released by NBC News’ Michael Isikoff and officially broken on Rachel Maddow‘s MSNBC show. So please keep those details in mind as you watch Bill O’Reilly claim that NBC has been relatively silent on this story.

O’Reilly had on Fox News personality Bob Beckel, a Democrat who believes the drone strike program is “constitutionally corrupt.” O’Reilly brought up the waterboarding issue and asked Beckel which he found more egregious: waterboarding or drone strikes. Beckel went with the latter, due to the deaths resulting from drone strikes. O’Reilly used prior uproar over waterboarding from the mainstream media to try and highlight a hypocrisy on its part (and the key word there is try).

“Remember the outcry over waterboarding? You know, everybody jumping up and down? NBC News, I thought they were going to, like, melt down over there. You heard anything on NBC about the drones?”

And while the answer should have been, “Yes! They broke the story, of COURSE they’ve had coverage of it,” Beckel said he has not seen anything from NBC on the drone strikes. O’Reilly continued to dig the two of them deeper into the hole.

Beckel insistently tried to tell O’Reilly that he shouldn’t be confronted as if he’s supposed to defend NBC for its editorial decisions, and given that he was going right along with O’Reilly’s false claim, NBC will probably be grateful for the favor.

Now, let’s allow that O’Reilly may have been talking about MSNBC instead of the whole of NBC. He would still be dead wrong, since the drone memo has gotten quite a lot of coverage on MSNBC’s programming, in the morning, in the afternoon, and in the evening. I’m starting to think Bill O’Reilly doesn’t actually watch NBC…