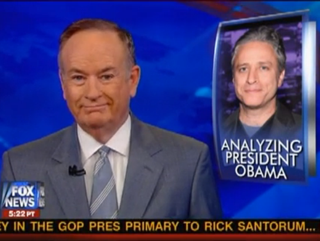 Over the years, Bill O’Reilly and Jon Stewart have developed a somewhat unexpected respect for what each other does, though they more often than not disagree on their exact political arguments. Last night was somewhat of an anomaly, in that O’Reilly assessed Stewart’s view of President Obama and Mitt Romney and, for the most part, agreed– President Obama, O’Reilly noted, was a “brilliant man,” while Romney had problems “feeling the positions conservatives espouse.”

RELATED: Bill O’Reilly To Jon Stewart: How Can You Watch 8 Hrs Of Fox And Still Be A Pinhead?!

O’Reilly began by noting that “there is not one Democratic pundit in America that has much influence,” by way of explaining why it is that Stewart gets to “define how the left sees the political arena.” With that in mind, he turned to Stewart’s appearance on The Late Show, where he described President Obama to David Letterman as a tired president who had no interest in dealing with Americans anymore. “He is the only President I’ve seen that begins every press conference with a heavy sigh,” joked Stewart. O’Reilly understood and agreed with the point. “No question, Mr. Obama is a brilliant man,” O’Reilly ceded, “but being intelligent and being effective are two different things.” He noted that Presidents Truman and Reagan were “not great thinkers” and much better presidents because they were effective, and that those who believed President Obama wanted to “reinvent the economic system” were wrong.

As for Romney, Stewart joked that he was unable to connect with Americans because he tried so hard to be a “regular guy” in inauthentic ways. There, O’Reilly agreed, but he thought it was more endearing than off-putting, calling Romney a “likable guy.” His was not a “bootstraps story,” he admitted, and “what is holding Romney back is his inability to feel the positions conservatives espouse,” but he did not think that this was a fault of him being a “charlatan,” though he left that door open.

O’Reilly’s analysis of Stewart via Fox News below: