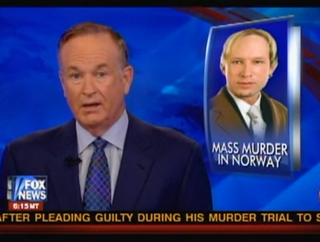 Bill O’Reilly doesn’t typically reserve an entire segment of his show to a monologue on his own– aside from his opening “Talking Points Memo”– so when he does, it’s worth noting. O’Reilly broke his “Impact” segment in two tonight to allow for a longer monologue on Anders Breivik, the mass murderer who butchered dozens of children in Norway, and the media’s classification of him as “Christian.” “No one believing in Jesus commits mass murder,” he clarified, calling the label “dishonest and insane.”

O’Reilly first defined what Breivik was, though he would later return to add “loser” and “loon” to his initial classification as “brutal fanatic who apparently objects to the presence of Muslims in Europe.” Breivik was, O’Reilly argued in no vague terms, “not a Christian, that’s impossible. No one believing in Jesus commits mass murder. The man might’ve called himself a Christian on the neck, but he is not of that faith.” O’Reilly added that Breivik was not attached to any church, not to mention that there was “no evidence– none– that this killer practiced Christianity in any way.”

O’Reilly then turned to those who were classifying him as such– the New York Times especially– and explained their motives. “The left wants you to believe that fundamentalist Christians are threat, just like crazy Jihadists are… that is dishonest and insane.” O’Reilly’s reasoning is that “they don’t like Christians very much because we are too judgmental” on social issues, and so “the liberal media wants you to fear Christian terrorists.” The difference, O’Reilly concluded, was that “no government supported [Breivik], no self-proclaimed terror group like Al-Qaeda paid his bills.”

“There is no equivalency to jihad,” he concluded, and with Breivik those labeling his Christian had not found an equivalent holy war, but “just another violent, pathetic legacy stemming back to Cain.”