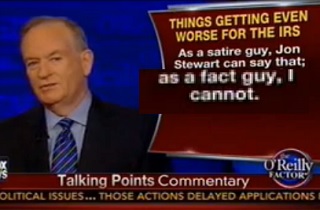 Viewers of Tuesday night’s The Rachel Maddow Show were treated to a perfunctory debunking of the Bill O’Reilly-amplified report that former IRS head Doug Shulman visited the White House 157 times over a four year period, and now know that there were only 11 confirmed visits by Shulman. Even as Rachel Maddow prepped the episode in which she called O’Reilly out for mentioning the story on Monday night’s Factor, though, Fox News host Bill O’Reilly was again repeating the debunked (last Friday) story, and in a neat bit of unintentional satire, calling himself “a fact guy” in the process.

The 157 visits story has been touted as a “smoking gun” that’s supposed to link the IRS’ targeting of conservative groups directly to the White House, even though, at face value, it proves nothing. Shulman himself has already testified to the reasons for his White House visits, reasons which conservatives have edited down to the Easter Egg roll. As it turns out, though, the 157 figure is the number of times Shulman was cleared, by Secret Service, to go to the White House (including the Eisenhower Executive Building, and the New Executive Office Building), not the number of times he actually went. As Maddow reminded viewers last night, only 11 of those visitor records actually record an arrival by Shulman, and the Atlantic report she cited was published Friday morning.

That didn’t stop Fox News personalities from mentioning the story 58 times since last week, on 17 different shows (including hard news shows), and it didn’t stop Bill O’Reilly mentioning it again last night. He played clips from a Jon Stewart bit that included the 157 visits story, and Stewart’s sarcastic suggestion that “having the President tell you to use the power of the IRS to destroy his political enemies on the right should only take about one meeting, two tops.”

O’Reilly added that “As a satire guy, Stewart can say that. As a fact guy, I can’t.”

The Fact Guy then proceeded to demand that the White House explain all those visits that have already been explained, and whose alleged frequency has been definitively debunked:

O’Really went on to banter about the 157 visits with Charles Krauthammer a few minutes later.

While the false story was being spread on Fox News, it was only mentioned 3 times on CNN, where it was also debunked, and ten times on MSNBC.

It would be remiss of me to slag O’Reilly for being a fake “Fact Guy” without giving all of the facts myself. Rachel Maddow’s broadcast was accurate, but a casual viewer might come away with the impression that Shulman only visited the White House 11 times, which also isn’t necessarily the case. The buried lede in The Atlantic’s report is that the White House visitor’s logs are kind of useless:

Indeed, of the 157 events Shulman was cleared to attend, White House records only provide time of arrival information — confirming that he actually went to them — for 11 events over the 2009-2012 period, and time of departure information for only six appointments.

Wait, that means that at 5 of those meetings, Shulman never left! The call is coming from inside the house!

…there is no record that Shulman attended a White House Easter Egg Roll under Obama, most likely because large events organized by the East Wing, like that one, don’t always show up in the visitor’s access records. Neither do visits by staffers, journalists covering large events, or people who enter the White House grounds in their pre-cleared cars, like Cabinet members, who do not wait for badge swipes at the gate with the policymaking hoi polloi.

So, Shulman probably was at the White House complex more than 11 times, but the visitor’s logs are unable to demonstrate just how many times. Those are all of the facts, and O’Reilly should present them to his viewers.