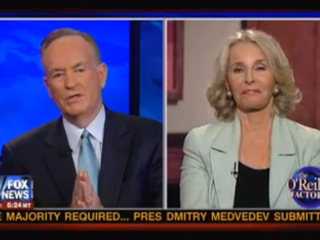 Even the tamest election nights tend to be a bit busy, and last night NBC News Chief Foreign Affairs Correspondent Andrea Mitchell sighed exasperatedly at the stress of her job– she had to follow both Mitt Romney‘s and Newt Gingrich‘s speeches simultaneously. Whether she was grumbling over the fact that she had to watch these two Republicans or merely over the strain of the job was a matter of contention on The O’Reilly Factor tonight, where Bill O’Reilly criticized the anchor for being blatantly liberal on many occasions.

RELATED: Andrea Mitchell: Can’t Use Hilary Rosen’s Comment Against Obama Because ‘His Wife Is A Homemaker’

“Andrea Mitchell is Chief Foreign Affairs Correspondent for NBC News,” O’Reilly noted, and the management of NBC and MSNBC is the same. Given that, he found the subjective approach on Mitchell’s part inappropriate. The Washington Post‘s Sally Quinn defended Mitchell, however, wondering “what the fuss is.” “Have you ever tried to watch two speeches at once and then try to speak about both?” she asked, noting that it was a difficult task. She also added that Mitchell “said Romney’s speech was good,” which negated O’Reilly’s claim.

O’Reilly nevertheless persisted that the only reason such language was permitted was that it regarded Republicans, and panelist David Rehr agreed. O’Reilly argued that, had the speeches given included President Obama, someone on the left would have accused Mitchell of bias– a point Quinn agreed with. That said, Quinn concluded that “the most important thing is that the viewers understand what they’re watching,” calling Mitchell’s work “beyond reproach.” O’Reilly brushed the comment off, calling Mitchell a “hardcore liberal,” while Rehr argued the bias was “bad for their organization, bad for their reputation.” O’Reilly believed the MSNBC team was beyond that, since “you’ve got Al Sharpton who is running a civil rights movement as well as hosting a program over there.”