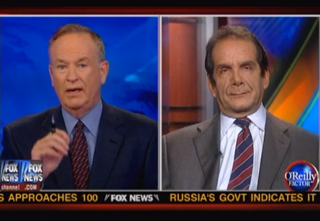 Bill O’Reilly has dedicated a significant amount of his debt crisis coverage to the rhetoric in the media against the Tea Party, particularly the comparisons made to the group and “terrorists” or “jihadis.” Tonight he continued, citing an “unacceptable” coordinated effort on the left to smear the Tea Party. But guest Charles Krauthammer disagreed– he refused to “credit” the left with “what it takes to put together a conspiracy.”

“The uber-left legions are at it again,” O’Reilly noted in his opening “Talking Points Memo.” Arguing that the “designers of far-left propaganda are very well-coordinated,” he cited a number of examples of people in the media calling the Tea Party and fiscal conservatives “terrorists” or some variation thereof. This, he noted, was humorous to some extent because “many on the left refuse to mention Jihad when real terrorists strike,” but was also “unacceptable” in its extremism. He added that he did “disagree with the Tea Party on occasion” and lost premium subscribers to his website over criticisms of Tea Party Caucus leader Rep. Michele Bachmann, but that did not justify the coordinated attack.

He then turned to Krauthammer, who agreed with the sentiment but did not see the threat of conspiracy. “I don’t think these people have the wherewithal to orchestrate a three-car motorcade,” he joked, much less an actual media conspiracy. “The reason for the repetition is the lack of intelligence,” he argued instead, “and lack of originality.”

O’Reilly insisted that this was not so, that the talking points came from left-wing online newsletters– “every morning, a little ding ding ding on their Blackberry,” and they’re off with their talking points. But Krauthammer simply wasn’t convinced. “I don’t credit them with the intelligence– with what it takes to put together a conspiracy.” That said, O’Reilly noted that he didn’t even credit the Tea Party with the direction Congress had gone with the budget– “I don’t think it was the Tea Party that got this done, it was the American people… the folks.” Krauthammer agreed but considered the two indistinguishable, noting that Americans are well aware of America “going off a cliff economically.”