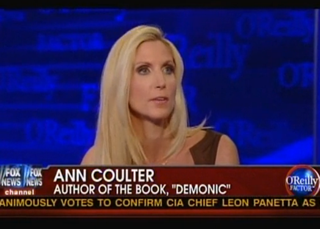 Bill O’Reilly introduced his first guest of tonight’s show emphasizing the bizarre position she now found herself in: “does it make you queasy that you are now in agreement with some on the far left about Afghanistan?” Naturally, when put that way, Ann Coulter was spooked, though “even a broken clock is right twice a day,” and argued that Democrats now wanted to stay in Afghanistan only because it “is not in America’s national security interest.”

Yes, Ann Coulter is fed up with the Afghanistan War, and would like to bring the troops home. In fact, she explained, she would have wanted them home immediately after toppling the Taliban, six months into the mission. While she emphasized that she agreed with the initial decision to enter Afghanistan after 9/11, she added that this was different from “nation-building,” which “you do not want to do in a place like Afghanistan– they have more goats than flushed toilets.” Besides, she added, Taliban leader Mullah Omar was not working directly with Al-Qaeda.

That point brought out O’Reilly correction pen, though Coulter wanted to move on from the statement. “You’re not going to say stuff like that and get away with it,” O’Reilly told her, stating that “of course” the Taliban brought Al Qaeda into the country. After a bit of cross-talk, Coulter returned to her original point: that Afghanistan is 70% illiterate and will never be a democracy– unlike, say, Iraq. “It was a stupid talking point on the campaign trail that Afghanistan was the good war and Iraq was the bad war,” she argued, “because Iraq served America’s national security interests.” Ultimately, she could not convince O’Reilly that troop withdrawal was the answer: “you don’t abandon ship right now, you play it out.”