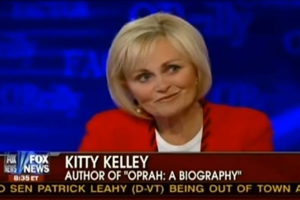 Bill O’Reilly has somehow found himself embroiled in the recent Oprah Winfrey biography scandal. The Fox News host had unauthorized biographer Kitty Kelley on the O’Reilly Factor to talk about her upcoming controversial Oprah biography and took her to task for writing what O’Reilly claims is a lie about him: that he put pressure on Winfrey to get on his show.

O’Reilly defends Winfrey vigorously, admitting that even though he doesn’t know her well, he likes Oprah, and suggesting that Kelley’s airing of her dirty laundry undermines the inspirational story and good deeds Winfrey is known for. He also takes the opportunity to challenge a story in Kelley’s book about him– that, in 2006, O’Reilly called Winfrey to complain that her program was leaning too much to the left specifically because she did not discuss O’Reilly himself or his new book at the time, Culture Warrior.

O’Reilly eventually made an appearance on her show and admitted to pressuring her on the Factor about her ideology, but claims that “I never made that call; we never talked.” He was fair enough to even provide footage of him attacking Winfrey for how many left-wing guests she booked on her show, but claimed the private conversation never happened. “Does it bother you,” he asks, that he denies it?

Kelley responds that it doesn’t bother her because “I think there was pressure on her to put you on the show” and that she got her information from two reliable sources from within O’Reilly’s publishing house confirmed the story and tried to reach out to O’Reilly himself via email, which he denies.

“I’m not doubting that someone told you that,” O’Reilly concedes, but, he continues, being told something by someone and having it be true are two different things.