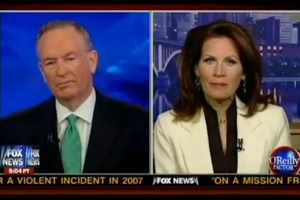 Rep. Joe Barton wasn’t the only member of Congress uncomfortable with the government agreeing with BP to put $20 billion into an escrow fund for claims of the victims of the BP oil disaster. Congresswoman Michele Bachmann expressed some concern with the account also, calling for BP not to be the government’s “chumps” and warning about federal overreach. She visited Bill O’Reilly last night, who did not sympathize with Bachmann or BP in the least.

This is the closest to a shoutfest Bachmann has involved herself in in a long time– even debates with liberal Florida Congressman Alan Grayson have been fairly civil– with O’Reilly getting fired up about “biggest weasel on the planet” BP CEO Tony Hayward and “the Swedish guy talking about the little people,” and trying to understand why Bachmann would be concerned about them. She argued that “no one is saying the fund shouldn’t be established,” but that the fund may be “politicized,” and that the White House put pressure on the BP executives suggesting they may go to prison.

O’Reilly still didn’t agree with the language though– “using words like shakedown and extortion, I’m not agreeing with that,” and thought the fund was “the best thing” Obama has done, not to mention that O’Reilly claims he would “go in there with a machine gun if I were President,” so the threats, to him, seem mild.

While Bachmann never directly addressed the language– and O’Reilly calls her out for “dodging the question”– she concluded that “the point is, is he putting pressure on, the threat of a criminal trial– which is the force of government– so that they’ll give him money?”