Bill O’Reilly Challenges Ted Koppel: Give Me Examples Of My Lies And Shut Me Up For Good 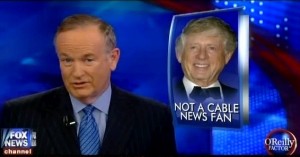 If a mainstream journalist were to associate Bill O’Reilly‘s name with the death of real news, it would normally be a safe bet to predict that The Factor host would come back swinging. Surprisingly, Ted Koppel (the author of the controversial proclamation), got off easy when O’Reilly’s harshest insult was to say “Koppel is at least my intellectual equal.”

If you missed Koppel’s opening shot, here’s the backstory.  On Sunday, The Washington Post featured an editorial by Koppel where he criticized the cable news channels for being dominated by opinion shows that treat opinion as fact and selectively only choose to report stories that advance their network’s partisan slant. And normally, whenever O’Reilly is attacked by name in the media, he is quick and jokingly lethal with his response.

Overall, O’Reilly seemed more perplexed than angry, assuming Koppel’s “ongoing beef” was due to the expanding influence of FOX News. O’Reilly, eager to learn Koppel’s rationale, wanted him to come in for questioning, but given how fun that sounds for Koppel, O’Reilly predicted that Koppel would be unable to “give me examples of me lying on the air, using an opinion not based on fact.  He couldn’t do it and if he could, he oughta come on in here and do it, and he’d shut me up for good.”

For all you Keith Olbermann fans, start a letter-writing campaign to Koppel, because if he appears on The Factor, this might be your chance to silence O’Reilly for good.  And speaking of Olbermann, who was also mentioned by Koppel, it is always fun to watch O’Reilly come so close, but ultimately refrain from mentioning his MSNBC rival by name.

Finally, just to clear up a point of confusion during the interview, conservative guest Tammy Bruce claimed Katie Couric previously said “she was looking forward to going into the midwest to mingle with the unwashed masses.” O’Reilly did not believe Couric actually made that statement, and in fact, it does seem to be an exaggeration, but you can be the judge of how much so.  Apparently, Couric said she was touring the “great unwashed middle of the country.”

Watch the clip from FOX News: