O’Reilly Clashes With Liberal Guest Over Taxes: Does The Gov’t Have A Right To ‘Take Half Your Stuff?’ 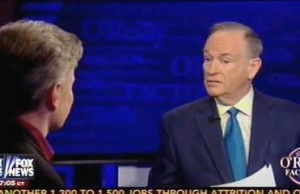 Bill O’Reilly tonight express his outrage with the Congressional Progressive Caucus over a budget proposal that includes taxing billionaire at 49 percent. O’Reilly squared off with Demos co-founder David Callahan over whether it is “morally right” for the government to impose that level of taxation on any American citizen. Callahan told O’Reilly that taxes were that high during the Reagan years, with O’Reilly dismissing that argument as irrelevant and asking if the government has any right to “take half your stuff.”

O’Reilly declared that if the CPC budget actually went into effect, it would “absolutely destroy the American economy, predicting that billionaires would have to hand over their personal information to the IRS. Callahan said, “Donald Trump and his dermatologist shouldn’t be paying the same tax rate.”

O’Reilly asked Callahan if it is “morally right” for the government to tax any American that much. Callahan pointed out that the top tax bracket under Reagan was around 50 percent, though O’Reilly shot back that no one really paid all of that due to deductions and tax shelters. He dismissed the Reagan argument as “not relevant to our discussion,” saying the real issue is if “the federal government in a free nation… [has] the right to take half your stuff, no matter how much money you earn.”

O’Reilly asked Callahan if he is a socialist person. Callahan simply told O’Reilly that he thinks any American who has done “phenomenally well” should help the economy “get out of the hole we’re in.” O’Reilly argued that the economy did better after taxes were cut and suggested that the CPC budget “would actually hurt poor people.” Callahan insisted that the economy was booming during periods of high taxation. O’Reilly ended by remarking, “I don’t know if that’s freedom.”