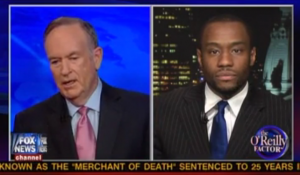 On Thursday night’s The O’Reilly Factor, Bill O’Reilly and Marc Lamont Hill discussed a piece by the Wall Street Journal‘s Shelby Steele that argues “black teenagers today are afraid of other black teenagers, not whites” — and that the Trayvon Martin case is an anomaly.

Hill argued that Steele is wrong “all over the place.” Al Sharpton and Jesse Jackson aren’t outraged that a black person was killed by a non-black person, he said, but because there hasn’t yet been justice. That the shooter was allowed to go home. “The whole case was a mess, and that’s what people are outraged about, the lack of justice,” Hill said.

Furthermore, Hill said just because black-on-black violence is an important issue, that doesn’t mean we can’t talk about “injustice coming from the criminal justice system” in the Martin case.

It would be “unusual,” he said, if they showed the same amount of intensity had Zimmerman also been black. Hill replied, “You know why it would be unusual? Because when black people are accused of shooting people, they get arrested. They get charged. They don’t get to home and watch Seinfeld that night.”

Hill added that in his experience with Sharpton and Jackson, he’s seen that they do talk about responsibility. But right now, he said, “There is a dead kid whose family isn’t getting justice and has nothing to do with black-on-black violence.”

The pair further argued over demographics of violence, particularly in Chicago. “I don’t know anyone who doesn’t fear killers irrespective of what race they are,” Hill said. Contrary to O’Reilly’s assertion, Hill said Chicago does have white gangs, not just black ones — to which O’Reilly responded that the murder rate among African-Americans is startlingly higher than that of the population base.

That, Hill said, is why they’re fighting for justice in the Trayvon case — because “all life is valuable.”