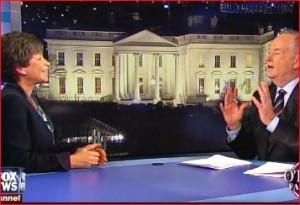 Bill O’Reilly faced off with White House senior advisor Valerie Jarrett Thursday night over President Obama‘s “My Brother’s Keeper” initiative, and they tussled over the “gangsta” culture O’Reilly argued holds plenty of young people back and what the White House can do to help stem problems like teenage pregnancy and the collapse of the family unit. O’Reilly told Jarrett he doesn’t think the Obama administration sees the “urgency” of many of these problems,” and told her that “you’re going to have to get people like Jay-Z, Kanye West, all of these gangsta rappers, to knock it off.”

O’Reilly argued it’s a problem when young black boys idolize “these guys with the hats on backwards” and “terrible rap lyrics” and drug use, and told Jarrett Obama has the power to “reverse the peer pressure.” Jarrett agreed that it’s important to have great “role models” for young people, but O’Reilly insisted, “You got to get them in there to tell these kids that you’ve got to stop the disruptive behavior or you’re going to wind up in a morgue or in prison.”

O’Reilly also said Michelle Obama should come on his show and say to the young women of America that getting pregnant at a young age is dangerous and wrong. Jarrett said it’s more important to talk to young girls directly rather than going on TV, but O’Reilly insisted it would get loads of attention from a wide audience.

Jarrett told O’Reilly there are encouraging signs, that the boys at the White House today “were at risk last year” and now “they’re standing tall and doing well in school.”

O’Reilly also grilled Jarrett about Obama’s worsening poll numbers. Jarrett acknowledged the “challenging time” the White House has been through, but said Obama has never focused on the daily polling numbers.”