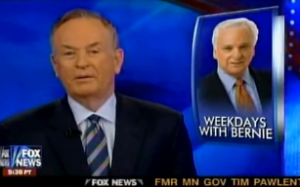 Good news media. Bill O’Reilly and Bernard Goldberg both agree that you’re doing a pretty fair job covering Osama bin Laden‘s death, with the exception of some “over-the-top” stuff on The View. Yet O’Reilly suggested it would have been fascinating to see what the media’s reaction would be if President Bush took the same action.

“Here’s why I think the media has been fair, generally speaking, in its reportage of this incident – because it helps Barack Obama. And I’m not saying that with any disdain, because I do believe the President did a gutsy, good job on this.”

Goldberg had one quibble in that he didn’t like reporters repeating any statements that suggest Bin Laden was “assassinated” rather than just shot. Hopefully Goldberg doesn’t run into Judge Andrew Napolitano in the Fox hallways, since Napolitano spent last night worrying about this opening the door to potentially more government-sanctioned “assassinations.”

O’Reilly and Goldberg also agreed that Obama should not receive any criticism from conservatives over his handling of this situation and Goldberg warned:

“I’ll tell you what’s going to happen if the right starts attacking him – the big voices on the right on radio and television – the independents will re-elect Barack Obama. Because they will say it’s unfair.”

O’Reilly added, “not only unfair, but just crazy unreasonable and you know you want to make your case in a very fair and balanced way, as we try to do here on The Factor.” Is that a veiled reference to a certain radio host who demanded that Obama “owes us an apology”? If so, that’s one “big voice on the right” who will likely have an opinion on whether he is “crazy unreasonable.”