Bill O’Reilly: Cut Off The Cash For NPR And PBS 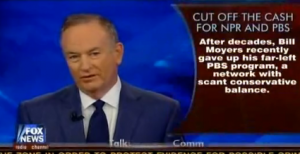 Ever since NPR fired Juan Williams, conservatives have been calling for the federal government to “defund” the media conglomerate once known as National Public Radio. Tonight, Bill O’Reilly took things a step further, saying that the government should cut funding for PBS as well as NPR.

O’Reilly begins by citing Bill Moyers, who stepped down from his PBS news analysis show—”an exposition that often enraged conservatives because it was so one-sided—last May. The Fox host then notes that there were few conservative voices on PBS to balance Moyers before saying that the Democratic party is “in trouble” partially because of spending—according to O’Reilly, the nation’s debt has grown $5 trillion since Nancy Pelosi became the Speaker of the House. (Of course, Republican George W. Bush was still president when Pelosi was sworn in, so this seems like an odd fact to cite; why not say how the debt has grown since President Obama‘s Democratic administration began?)

“This year, the Corporation for Public Broadcasting will receive 420 million taxpayer dollars,” O’Reilly continues. Some of that money will go to NPR and PBS, companies O’Reilly says employ no conservative analysts. “Is that fair?” the host asks. Clearly, he’s implying that the answer to that question is a resounding “no.”

O’Reilly claims not to have a vendetta against public broadcasting: “I look forward to competing with them in the marketplace,” he says. “This is a call for sanity.” See his call to arms for yourself below.