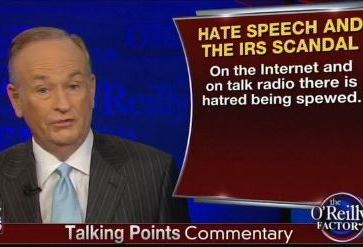 Bill O’Reilly tonight had a rather unique Talking Points Memo tonight, mostly covering Facebook’s newly announced policy on sexist hate speech. O’Reilly used Facebook as a jumping off-point to criticize political hate speech of any kind, even using it as an explanation for why the IRS targeted Tea Party groups. But when O’Reilly teased the segment in the intro section of his show, he ran a clip of conspiracy hound Alex Jones flying off the handle, with the words “HATE SPEECH” right next to his name: 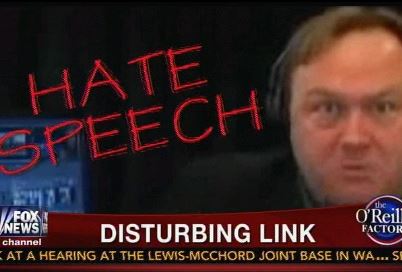 O’Reilly declared there is “plenty of hatred being spewed” on the internet and on talk radio, and credited Facebook for its new policy of taking down posts promoting sexist hate speech. O’Reilly said it’s disturbing how “commonplace” and “acceptable” hate speech is, mostly attributing the level of public hate speech to the internet.

O’Reilly also included the IRS tea party targeting scandal, noting how “some people inside the IRS apparently hate conservatives and want to hurt them.” He said what the IRS did went beyond internal hatred and was an active “demonstration of malice.”